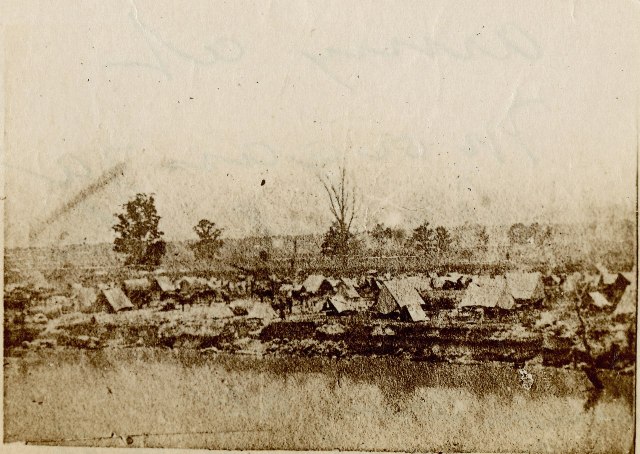 Researchers investigating the lives of nine formerly enslaved Black men who enlisted with the 47th Pennsylvania Volunteer Infantry during the American Civil War recently uncovered new details about two of those soldiers.

In addition to finding more data related to the immediate post-war life of Aaron French (learn more about him in this article here), including how and why he ended up settling in Mississippi following the Civil War, researchers have also now found important information about the life of Hamilton Blanchard—who enrolled with Bullard on the same day.

Born into slavery in Natchitoches, Louisiana sometime around 1843, Hamilton Blanchard was able to secure his freedom twenty-one years later when the United States Army arrived in town as part of an expedition led by Union Major-General Nathaniel P. Banks. Determined not to be forced back into bondage after the Union troops moved on in their ill-fated quest to capture the city of Shreveport, he chose to enlist with one of the units serving under Banks—the 47th Pennsylvania Volunteer Infantry—the only regiment from Pennsylvania that was involved in the Union’s 1864 Red River Campaign across Louisiana.

After enrolling in the military, Hamilton Blanchard was then assigned to Company D at the rank of “Cook” on 5 April 1864.

The official muster-in of Blanchard, Aaron Bullard, and three other young Black men who enrolled that day did not take place immediately, however, because the 47th Pennsylvania Volunteers were ordered to move out shortly after their arrival, and were quickly drawn into intense combat with enemy troops commanded by Confederate Major-General Richard Taylor (a plantation owner and son of Zachary Taylor, former President of the United States). Battered badly during the Battle of Sabine Cross Roads near Mansfield, Louisiana on 8 April and in the Battle of Pleasant Hill the next day (9 April), they fought the Confederate Army again on 23 April near Monett’s Ferry in the Battle of Cane River and on 16 May in the Battle of Mansura near Marksville.

From that point on, those nine men traveled with the 47th Pennsylvania as it returned to the East Coast and engaged in multiple battles associated with Union Major-General Philip Sheridan’s 1864 Shenandoah Valley Campaign across Virginia, the protection of the nation’s capital following the April 1865 assassination of President Abraham Lincoln, and the early days of Reconstruction in Georgia and South Carolina.

On Christmas Day in 1865, Hamilton Blanchard then joined his fellow 47th Pennsylvania Volunteers in mustering out from their final duty station in Charleston, South Carolina.

Having been honorably discharged from the 47th Pennsylvania Volunteer Infantry when the regiment mustered out, at least two of the nine formerly enslaved Black men who had enlisted with the regiment evidently made their way north—possibly when the other members of their former regiment returned home to Pennsylvania. (It is also possible, however, that they made the journey independently of their former regiment because both men appear to have resettled in the Washington, D.C. area, post-war, while the other 47th Pennsylvania Volunteers were transported by ship directly to New York City and then by train to Camp Cadwalader in Philadelphia, Pennsylvania, where they were given their final discharge papers on 9 January 1866.) 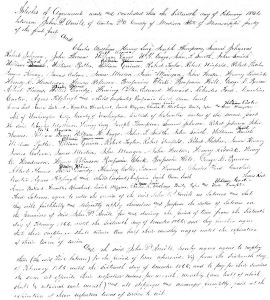 What is known for certain is that Hamilton Blanchard and Aaron Bullard made contact with a representative of the Bureau of Refugees, Freedmen, and Abandoned Lands sometime in late 1865 or early 1866. They then signed a contract with the Freedmen’s Bureau during the early winter of 1866 in which they both agreed to join a large group of formerly enslaved Black men, women, and children who would be providing farm labor to a man named John P. Avrill (alternate spellings: “Averile”, “Averill”, “Arvile”, “Arville”, or “Avrille”) at his property in Canton, Madison County, Mississippi.

That Freedmen’s Bureau contract was slated to be in effect between 16 February and 16 December of 1866, and begins with a cover page which states:

The main body of the document goes on to reveal the following details of the contract:

Articles of Agreement made and concluded this the Sixteenth day of February 1866 between John P. Arvile of Canton P.O. County of Madison State of Mississippi party of the first part and

The next paragraph lists Hamilton Blanchard and Aaron Bullard a second time, along with multiple names from the aforementioned group of farm laborers. Subsequent paragraphs spell out further points of the agreement:

All of Washington City, County of Washington, District of Columbia, parties of the second part, the said Charles Matthews, Henry Long, Joseph Thompsen, Samuel Johnson, Robert Johnson, John Thomas … Aaron Bullard, Hamilton Blanchard, Isaiah Wiggins, James Lewis … Field Laborers, agree to enter the service of the said John P. Averile as Laborers and that they will faithfully and diligently apply themselves and perform the duties of Laborers on the premises of said John P. Averile for and during the period of time from the Sixteenth day of February 1866 until the sixteenth day of 1866; and they further agree that their employer shall retain one half their monthly wages until the expiration of their term of service.

And the said John P. Arvile hereby agrees to employ them (the said Field laborers) for the period of time aforesaid. Viz from the Sixteenth day of February 1866 until the sixteenth day of December 1866; and to pay for their services the sum set opposite their respective names per month, monthly (one half of which shall be retained each month) and all stoppages and arranged promptly, paid at the expiration of their respective terms of service to wit…..

In equal monthly payments; and the said John P. Arvile further agrees to furnish said Freed laborers … quarters, fuel, full substantial and healthy rations, and all necessary attendance and supplies in case of sickness, in addition to the compensation … named, and that he will assist and encourage efforts for the education of the children of his employees, and it is further agreed by the said John P. Arvile, that in case he at any time fails to perform his part of this contract agreement he will pay to each of the said laborers the full sum of One hundred dollars [strikethrough made by someone’s hand to original contract], as fixed, agreed and liquidated damages. This contract can be annulled by the mutual consent of the Employer and the employee, but only in the presence of an Authorized Agent of the Bureau of Refugees Freedmen and Abandoned Lands and such annullment [sic] on the part of the Employer and anyone [sic] employee shall in no wise affect the validity of the Contract in respect to the employer and the other employees and should either party violate this contract then the other party shall make complaint to the nearest authorized agent of the Bureau Refugees Freemen & Abandoned Lands.

In all cases, the reality was far different. Per the contract, they were initially paid only half of what their monthly wages were because the Freedmen’s Bureau agent in charge of looking out for the welfare of these formerly enslaved men, women, and children allowed the white farmer—their “employer”—to “retain one half their monthly wages until the expiration of their term of service.”

No further data has been uncovered from Freedmen’s Bureau records about the status of those unpaid wages or the outcome of that contract, but because these Black men, women, and children were essentially returned to an unequal system of servitude by the Freedmen’s Bureau agent (as evidenced by the manner in which this contract was drafted—favoring the White “employer” over the Black “field laborer” and including multiple after-the-fact revisions, such as word insertions and strikethroughs)—it is highly unlikely that Hamilton Blanchard, Aaron Bullard, or the other Black men, women, and children mentioned in the contract were ever paid the full amount they were entitled to for what was most assuredly very hard labor. 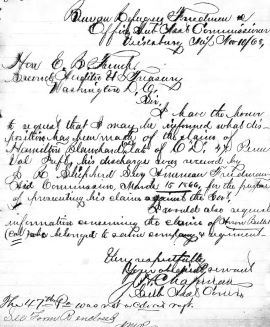 This hypothesis posed by researchers investigating the history of the 47th Pennsylvania Volunteer Infantry is backed up by a letter of inquiry penned on 10 November 1868 by J. H. Chapman, a Sub-Assistant Commissioner of the Freedmen’s Bureau working at an office in Vicksburg, Mississippi, to E. B. French, Second Auditor of the U.S. Department of the Treasury in Washington, D.C.

In this letter, Chapman asks French that he “be informed what disposition has been made of the claim of Hamilton Blanchard, late of Co. “D” 47 Penn Vol. Inft., his discharge was received by J. R. Schuchard [sp?]” of the “Freedmen’s Aid Commission, March 15, 1866.” Chapman added that he was requesting this update on Blanchard’s behalf “for the purpose of prosecuting his claim against the Gov.” He then also requested “information concerning the claim of Aaron Bullard (Col.) who belonged to same company & regiment.”

* Note: An unidentified individual added an undated notation to the bottom of this letter in handwriting that is clearly different from that of the original letter writer, Chapman. That notation correctly states: “The 47th Pa was not a colored regt. See Form R enclosed. A.M.R. 103.” (The 47th Pennsylvania Volunteer Infantry became an integrated regiment on 5 October 1862, but its African American members were not considered to be part of the U.S. Colored Troops, also known as the USCT.)

Researchers have not yet located the “Form R” referred to in the notation to Chapman’s letter, but will be pursuing this lead, as well as investigating the claims filed by Hamilton Blanchard and Aaron Bullard, and searching for additional information regarding what happened to Hamilton Blanchard during and after the 1870s.

An additional avenue of inquiry will be the potential relationship that may have developed between Aaron Bullard and E. B. French during or after this time—a new theory being considered in light of the discovery of French’s name on this letter. (Aaron Bullard changed his surname, “Bullard,” which had been associated with his enslavement in Louisiana, to “French” sometime between his 1868 appeal to E. B. French in the U.S. Treasury Department and the day he was visited at home in Issaquena County, Mississippi by an enumerator of the 1870 U.S. Census—possibly indicating that he wanted to both shed his “slave name” and honor someone who had been helpful to him.)