Both of the younger children, Margaret and Joseph, were born in the Keiser family home in Saville Township, Perry County.

Emanuel H. Keiser, eldest son of the Keiser family of Saville Township in Perry County, became the first of his immediate family members to enlist for Civil War Military Service. Enrolling and mustering in at the age of 18 at Sunbury in Northumberland County, Pennsylvania on 27 November 1863, he entered as a Private with the 47th Pennsylvania Volunteers’ Company C (also known as the “Sunbury Guards”). Military records described him at the time as being a 5’8″ tall laborer with brown hair, hazel eyes and a florid complexion.

Uriah Keiser enrolled for Civil War military service at Harrisburg, Dauphin County, Pennsylvania on 20 February 1864, and mustered in as a Private with the 47th Regiment, Pennsylvania Volunteer Infantry, the same regiment with which his eldest son, Emanuel H. Keiser, had been serving. While Uriah’s son Emanuel had been assigned to Company C since 27 November 1863, Uriah was placed on the 47th’s roster of “Unassigned Men” in February 1864 and, according to the U.S. Civil War Pension application filed by his widow, Margaret Keiser, he remained on that roster of Unsassigned Men for the duration of his service while Emanuel continued to serve with Company C.

Both of the Keiser men joined just in time to help their fellow 47th Pennsylvania Volunteers make history as the only Pennsylvania regiment to participate in Union General Nathaniel Banks’ Red River Campaign across Louisiana from March to May 1864.

From 14-26 March, the Keisers joined with their fellow 47th Pennsylvanians in trekking through New Iberia, Vermillionville, Opelousas, and Washington while en route to Alexandria and Natchitoches, Louisiana. Often short on food and water, the men encamped briefly at Pleasant Hill the night of 7 April before continuing on the next day, marching until mid-afternoon.

Rushed into battle ahead of other regiments in the 2nd Division, 60 members of the 47th were cut down on 8 April during the volley of fire unleashed during the Battle of Sabine Cross Roads. The fighting waned only when darkness fell. Exhausted, those who were uninjured collapsed beside the gravely wounded. After midnight, the surviving Union troops withdrew to Pleasant Hill.

The next day, the 47th Pennsylvania Volunteers were ordered into a critically important defensive position at the far right of the Union lines, their right flank spreading up onto a high bluff. By 3 p.m., after enduring a midday charge by the troops of Confederate General Richard Taylor (a plantation owner and son of Zachary Taylor, former President of the United States), the brutal fighting still showed no signs of ending. Suddenly, just as the 47th was shifting to the left side of the massed Union forces, the men of the 47th Pennsylvania were forced to bolster the 165th New York’s buckling lines by blocking another Confederate assault.

Casualties were once again severe. A number of men were killed instantly or died later from their wounds.  Lieutenant Colonel George W. Alexander was nearly killed, and the regiment’s two color-bearers, both from Company C, were also wounded while preventing the American flag from falling into enemy hands. Still others from the 47th were captured, marched roughly 125 miles to Camp Ford, a Confederate Army prison camp near Tyler, Texas, and held there as prisoners of war (POWs) until released during prisoner exchanges beginning 22 July 1864. At least two men from the 47th never made it out of that camp alive; another member of the regiment died while being treated at the Confederate Army hospital in Shreveport, Louisiana.

Following what some historians have called a rout by Confederates at Pleasant Hill and others have labeled a technical victory for the Union or a draw for both sides, the 47th fell back to Grand Ecore, where the men resupplied and regrouped until 22 April. Retreating further to Alexandria, the 47th Pennsylvania Volunteers and their fellow Union soldiers then scored a clear victory against the Confederates at Cane Hill. 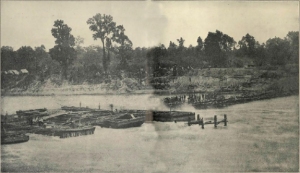 Christened “Bailey’s Dam” for the Union officer who ordered its construction, Lt. Col. Joseph Bailey, this timber dam built by the Union Army on the Red River in Alexandria, Louisiana in May 1864 facilitated passage of Union gunboats. Photo: Public domain.

On 23 April, the 47th and their fellow brigade members crossed the Cane River via Monett’s Ferry and, under the command of Lieutenant Colonel Joseph Bailey, helped to build a dam from 30 April through 10 May, to enable federal gunboats to easily traverse the Red River’s rapids. Beginning 16 May, most of the 47th moved from Simmsport across the Atchafalaya to Morganza.

Sadly, Private Uriah Keiser became one of those whose service was short lived. Sometime during the Red River Campaign, Private Keiser fell ill with tertiary intermittent fever or camp fever, as well as other medical issues. He was initially admitted to Union Army medical facilities at St. Laurel Hill before being transferred to the Union’s Marine General Hospital at New Orleans, Louisiana on 23 May 1864.

Transferred from the 47th Pennsylvania Volunteers to the Veterans Reserve Corps (also known as the “invalid corps”) on 22 June 1864, he died from disease-related complications at the Union Marine General Hospital or Barracks Hospital in New Orleans, Louisiana on 18 or 29 July 1864. He was interred at the Chalmette National Cemetery.

Yours of September 1st 1865, inquiring how the name of your husband appeared on the Rolls & Records of the 47th Pa Vols, addressed to Col Gobin, was this day referred by him to me for investigation and report.

Uriah Keiser was never assigned to any company but carried on our Rolls and Returns as an unassigned Recruit.

Any further information you may desire, (if in my possession) will be cheerfully furnished upon application.

I am Very Respectfully Yours,

A Son Soldiers On

Following his father’s tragic death, Private Emanuel H. Keiser continued to serve with Company C of the 47th Pennsylvania Volunteers. Stationed in New Orleans beginning 20 June 1864, he and his fellow 47th Pennsylvanians sailed north to Washington, D.C. via the steamer McClellan from 5-12 July 1864. Upon their arrival, the 47th Pennsylvania Volunteers joined up with General David Hunter’s forces at Snicker’s Gap, Virginia in mid-July where they assisted in defending the nation’s capital while also helping to drive Confederate forces from Maryland.

Attached to the Middle Military Division, U.S. Army of the Shenandoah from August through November of 1864, it was at this time and place, under the leadership of legendary Union General Philip H. Sheridan and Brigadier-General William H. Emory, that the members of the 47th Pennsylvania would engage in their greatest moments of valor. Of the experience, Company C’s Samuel Pyers said it was “our hardest engagement.”

Sent out on skirmishing parties afterward, the men of the 47th Pennsylvania finally made camp at Cedar Creek. Moving forward, they would continue to distinguish themselves in battle, but they would do so without two respected commanders: Colonel Tilghman Good and his second in command, Lieutenant Colonel George W. Alexander, who mustered out on 23-24 September upon expiration of their respective terms of service. Fortunately, Good and Alexander were replaced by others equally admired both for their temperament and the front line experience: John Peter Shindel Gobin, Charles W. Abbott and Levi Stuber.

On 19 October 1864, Early’s Confederate forces briefly stunned the Union Army, launching a surprise attack at Cedar Creek, but Sheridan was able to rally his troops. Intense fighting raged for hours and ranged over a broad swath of Virginia farmland. Weakened by hunger wrought by the Union’s earlier destruction of crops, Early’s army gradually peeled off, one by one, to forage for food while Sheridan’s forces fought on, and won the day.

It was, however, yet another costly engagement for Pennsylvania’s native sons. The 47th experienced a total of 176 casualties during the Cedar Creek encounter alone, including: Sunbury Guards’ Sergeant John Bartlow and Privates James Brown (a carpenter), Jasper B. Gardner (a conductor), George W. Keiser (an 18-year-old farmer), Theodore Kiehl, Joseph Smith, and John E. Will – all killed in action on 19 October. Sergeant William Pyers, father of Company C Field Musician Samuel H. Pyers and the very same gallant Sunbury Guarsdsman wounded while protecting the colors at Pleasant Hill, also departed from the field of battle forever at Cedar Creek, Captain Daniel Oyster, shot in one shoulder just weeks earlier, sustained a gunshot wound to his other shoulder.

Stationed at Camp Russell near Winchester from November through most of December, the 47th Pennsylvania Volunteers mourned their dead while the wounded recuperated. Five days before Christmas, the 47th Pennsylvania Volunteers were ordered to march again – this time through a snowstorm for outpost duty at Camp Fairview in Charlestown, West Virginia. 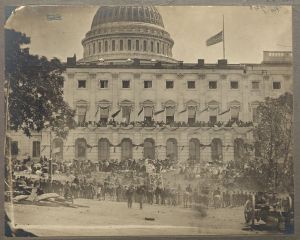 Assigned first to the Provisional Division of the 2nd Brigade of the Army of the Shenandoah in February, the men of the 47th were ordered back to Washington, D.C. 19 April to defend the nation’s capital following President Lincoln’s assassination. At least one member of the regiment was assigned to guard the late President’s funeral train while others may have guarded key assassination conspirators during the early days of their imprisonment and trial. All who served during this time were most certainly eyewitnesses to one of the most important and pivotal times in America’s history.

While serving in Dwight’s Division, 2nd Brigade, U.S. Department of Washington’s 22nd Corps, Company C and their fellow 47th Pennsylvania Volunteers also participated in the Union’s Grand Review on 23-24 May.

Captain Levi Stuber of Company I was also promoted to central regimental command at this time, and assumed the rank of Major.

On their final swing through the South, the 47th served in Savannah, Georgia from 31 May to 4 June 1865 as part of the 3rd Brigade, Dwight’s Division, U.S. Department of the South, and at Charleston, South Carolina beginning in June. 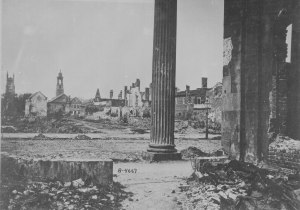 Duties at this time were largely Provost (military police) or Reconstruction-related (repairing railroads and other key regional infrastructure items which had been destroyed or damaged during the long war). The 9 August 1865 edition of the New York Times provided an update regarding the Union Army’s occupation of Charleston, South Carolina. Major Stuber was one of the officers listed in this article, and was described as: “Assistant Provost-Marshal Maj. LEVI STUBER, 47th Pennsylvania Volunteers.”

Finally, on Christmas Day, 1865, at Charleston, South Carolina, Private Emanuel H. Keiser and the other men of the 47th Regiment, Pennsylvania Volunteers, began to be honorably mustered out. Some were not released until after the New Year but, eventually, they were all sent home by steamship to New York, and then via train to Philadelphia and Camp Caldwalader, where they were paid for their service and given discharge papers.

Sadly, the children of Private Uriah Keiser were orphaned soon after the Civil War’s end when their mother, Margaret (Sailor) Keiser, passed away in Saville Township, Perry County, Pennsylvania on 5 September 1866. She was laid to rest at the Buffalo Stone Church Cemetery in Saville Township on 7 September.

A guardian, Andrew Loy (alternate spelling “Foy”), a 50-year-old resident of Madison Township in Perry County, was appointed to protect the youngest of the Keiser children’s welfare (Margaret A. and Joseph T. Keiser); he subsequently filed for Private Keiser’s Civil War Pension with the assistance of Washington, D.C.-based attorney William Helmick, and then administered that pension of behalf of the minor Keiser children from the time of its award (awarded at $8.00 per month, beginning 5 April 1869; retroactive to 29 July 1864) through 1 December 1867 when Private Keiser’s youngest child turned 16.

Emanuel H. Keiser went on to marry and live a long, full life with his wife Elizabeth (born 22 June 1845; died 31 March 1914). They both lived to see the dawn of a new century. Emanuel passed away on 28 March 1900, and was interred at the Paxtang Cemetery in Dauphin County, Pennsylvania.