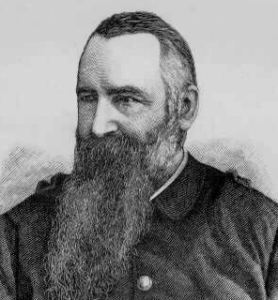 SIR: I have the honor to submit the following report of the part taken by the Forty-seventh Regiment Pennsylvania Volunteers in the action of October 22:

Eight companies, comprising 480 men, embarked on the steamship Ben De Ford, and two companies, of 120 men, on the Marblehead, at 2 p.m. October 21. With this force I arrived at Mackays Landing before daylight the following morning. At daylight I was ordered to disembark my regiment and move forward across the first causeway and take a position, and there await the arrival of the other forces. The two companies of my regiment on board of the Marblehead had not yet arrived, consequently I had but eight companies of my regiment with me at this juncture.

At 12 m. I was ordered to take the advance with four companies, one of the Forty-seventh and one of the Fifty-fifth Pennsylvania Volunteers, and two of the Sixth Connecticut, and to deploy two of them as skirmishers and move forward. After moving forward about 2 miles I discerned some 30 or 40 of the enemys [sic] cavalry ahead, but they fled as we advanced. About 2 miles farther on I discovered two pieces of artillery and some cavalry, occupying a position about three-quarters of a mile ahead in the road. I immediately called for a regiment, but seeing that the position was not a strong one I made a charge with the skirmishing line. The enemy, after firing a few rounds of shell, fled. I followed up as rapidly as possible to within about 1 mile of Frampton Creek. In front of this stream is a strip of woods about 500 yards wide, and in front of the woods a marsh of about 200 yards, with a small stream running through it parallel with the woods. A causeway also extends across the swamp, to the right of which the swamp is impassable. Here the enemy opened a terrible fire of shell from the rear, of the woods. I again called for a regiment, and my regiment came forward very promptly. I immediately deployed in line of battle and charged forward to the woods, three companies on the right and the other five on the left of the road. I moved forward in quick-time, and when within about 500 yards of the woods the enemy opened a galling fire of infantry from it. I ordered double-quick and raised a cheer, and with a grand yell the officers and men moved forward in splendid order and glorious determination, driving the enemy from this position.

On reaching the woods I halted and reorganized my line. The three companies on the right of the road (in consequence of not being able to get through the marsh) did not reach the woods, and were moved by Lieutenant-Colonel Alexander by the flank on the causeway. During this time a terrible fire of grape and canister was opened by the enemy through the woods, hence I did not wait for the three companies, but immediately charged with the five at hand directly through the woods; but in consequence of the denseness of the woods, which was a perfect matting of vines and brush, it was almost impossible to get through, but by dint of untiring assiduity the men worked their way through nobly. At this point I was called out of the woods by Lieutenant Bacon, aide-de-camp, who gave the order, ‘The general wants you to charge through the woods.’ I replied that I was then charging, and that the men were working their way through as fast as possible. Just then I saw the two companies of my regiment which embarked on the Marblehead coming up to one of the companies that was unable to get through the swamp on the right. I went out to meet them, hastening them forward, with a view of re-enforcing the five already engaged on the left of the road in the woods; but the latter having worked their way successfully through and driven the enemy from his position, I moved the two companies up the road through the woods until I came up with the advance. The two companies on the right side of the road, under Lieutenant-Colonel Alexander had also worked their way up through the woods and opened fire on the retreating enemy. At this point I halted and reorganized my regiment, by forming close column by companies.

I then detailed Lieutenant Minnich, of Company B, and Lieutenant Breneman, of Company H, with a squad of men, to collect the killed and wounded. They promptly and faithfully attended to this important duty, deserving much praise for the efficiency and coolness they displayed during the fight and in the discharge of this humane and worthy trust.

The casualties in this engagement were 96. Captain Junker of Company K; Captain Mickley, of Company I, and Lieutenant Geety, of Company H, fell mortally wounded while gallantly leading their respective companies on.

I cannot speak too highly of the conduct of both officers and men. They all performed deeds of valor, and rushed forward to duty and danger with a spirit and energy worthy of veterans.

The rear forces coming up passed my regiment and pursued the enemy. When I had my regiment again placed in order, and hearing the boom of cannon, I immediately followed up, and, upon reaching the scene of action, I was ordered to deploy my regiment on the right side of the wood, move forward along the edge of it, and relieve the Seventh Connecticut Regiment. This I promptly obeyed. The position here occupied by the enemy was on the opposite side of the Pocotaligo Creek, with a marsh on either side of it, and about 800 yards distant from the opposite wood, where the enemy had thrown up rifle pits all along its edge.

On my arrival the enemy had ceased firing; but after the lapse of a few minutes they commenced to cheer and hurrah for the Twenty-sixth South Carolina. We distinctly saw this regiment come up in double-quick and the men rapidly jumping into the pits. We immediately opened fire upon them with terrible effect, and saw their men thinning by scores. In return they opened a galling fire upon us. I ordered the men under cover and to keep up the fire.

My casualties here amounted to 15 men.

We arrived at Frampton (our first battle ground) at 8 p.m. Here my regiment was relieved from further rear-guard duty by the Fourth New Hampshire Regiment. This gave me the desired opportunity to carry my dead and wounded from the field and convey them back to the landing. I arrived at the above place at 3 o’clock the following morning.

I am, captain, very respectfully, your obedient servant,

SIR: I have the honor to submit the following report of the part taken by the First Brigade in the battles of October 22:

After meeting the enemy in his first position he was driven back by the skirmishing line, consisting of two companies of the Sixth Connecticut, one of the Forty-seventh Pennsylvania, and one of the Fifty-fifth Pennsylvania, under my command. Here the enemy only fired a few rounds of shot and shell. He then retreated and assumed another position, and immediately opened fire. Colonel Chatfield, then in command of the brigade, ordered the Forty-seventh Pennsylvania forward to me, with orders to charge. I immediately charged and drove the enemy from the second position. The Sixth Connecticut was deployed in my rear and left; the Fifty-fifth Pennsylvania on my right, and the Fourth New Hampshire in the rear of the Fifty-fifth, both in close column by divisions, all under a heavy fire of shell and canister. These regiments then crossed the causeway by the flank and moved close up to the woods. Here they were halted, with orders to support the artillery. After the enemy had ceased firing the Fourth New Hampshire was ordered to move up the road in the rear of the artillery and two companies of the Forty-seventh Pennsylvania to follow this regiment. The Sixth Connecticut followed up, and the Fifty-fifth moved up through the woods. At this juncture Colonel Chatfield fell, seriously wounded, and Lieutenant-Colonel Speidel was also wounded.

The casualties in the Forty-seventh Pennsylvania amounted to 96 men. As yet I am unable to learn the loss of the entire brigade.

I am, captain, very respectfully, your obedient servant,