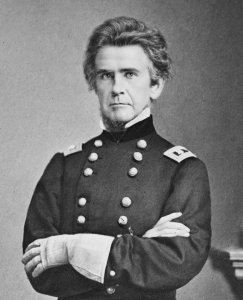 GENERAL: My third expedition to the main-land returned last night. The expedition was designed to accomplish the following objects:

First, to make a complete reconnaissance of the Broad River and its three tributaries, Coosawhatchie, Tulifiny [sic], and Pocotaligo; second, to test practically the rapidity and safety with which a landing could be effected; third to learn the strength of the enemy on the main-land, now guarding the Charleston and Savannah Railroad; and fourth, to accomplish the destruction of so much of the road as could be effected in one day. At this season of the year I did not deem it prudent to expose the troops upon the main-land for a longer period.

Every pains [sic] had been taken to secure as far as possible success for the expedition. Scouts and spies had been sent to the main-land to all the most important points between the Savannah River railroad bridge and the bridge across the Salkehatchie. A small party was sent out to cut, if possible, the telegraph wires. Scouts had been sent in boats up the tributaries of the Broad River. All the landings had been examined, and the depth of water in the several rivers ascertained as far as practicable. Two of our light-draught transports have been converted into formidable gunboats and are now heavily armed, to wit, The Planter and the George Washington. By my orders the New York Mechanics and Engineers, Colonel Serrell, had constructed two very large flat-boats, or scows, each capable of transporting half a battery of artillery, exclusive of the caissons, with the horses. They were provided with hinged aprons, to facilitate the landing not only of artillery but of troops from the transports.

Owing to an accident which occurred to the transport Cosmopolitan during the expedition to the Saint John’s River I found myself deficient in transportation, and applied to the commanding officer, Commodore Godon, of the South Atlantic Blockading Squadron, who promptly placed under my orders a number of light-draught gunboats for the double purpose of transportation and military protection.

On the evening of the 21st, under the command of Captain Steedman, U.S. Navy, the gunboats and transports were arranged in the following order for sailing: The Paul Jones, Captain Steedman, without troops; the Ben De Ford, Conemaugh, Wissahickon, Boston, Patroon, Darlington, steam-tug Relief, with schooner in tow; Marblehead, Vixen, Flora, Water Witch, George Washington, and Planter. The flat-boats, with artillery, were towed by the Ben De Ford and Boston. The best negro pilots which could be found were placed on the principal vessels, as well as signal officers, for the purpose of intercommunication. The night proved to be smoky and hazy, which produced some confusion in the sailing of the vessels, as signal lights could not be seen by those most remote from the leading ship. The larger vessels, however, got under way about 12 o’clock at night.

After a careful examination of the map I ordered a landing to be effected at the mouth of the Pocotaligo River, at a place known as Mackay’s Point. This is really a narrow neck of land made by the Broad River and the Pocotaligo, in both of which rivers gunboats could lie and furnish a perfect protection for the debarkation and embarkation of the troops. There is a good country road leading from the Point to the old town of Pocotaligo, then entering a turnpike, which leads from the town of Coosawhatchie to the principal ferry on the Salkehatchie River. The distance to the railroad was only about 7 or 8 miles, thus rendering it possible to effect a landing, cut the railroad and telegraph wires, and return to the boats in the same day. I saw that it would be impossible for the troops to be attacked by the enemy either in flank or rear, as the  two flanks were protected by the Pocotaligo River on the one hand and by the Broad and by the Tulifiny [sic], its tributary, on the other. Presuming that the enemy would make his principal defense at or near Pocotaligo, I directed that a detachment of the Forty-eighth New York, under command of Colonel Barton, with the armed transport Planter, accompanied by one or two light-draught gunboats, should ascend the Coosawhatchie River, for the purpose of making a diversion, and in case no considerable force of the enemy was met, to destroy the railroad at and near the town of Coosawhatchie.

In addition to our land forces we were furnished by the Navy with several transports, armed with howitzers, three of which were landed with the artillery, and thus gave us a battery of seven pieces. All the troops were furnished with 100 rounds of ammunition. Two light ambulances and one wagon, with its team, accompanied the expedition.

I have no official report from Brigadier-General Brannan, the officer in command, but, having had an interview with Generals Brannan and Terry and with several regimental commanders, I am enabled to give you a general outline of the facts and the results obtained.

First, we have learned the navigation of the Broad River, and have also ascended the Pocotaligo and Coosawhatchie and Rivers, so as to obtain a complete knowledge of these two streams; second, a landing was effected rapidly and in perfect safety, but, owing to the ignorance of our pilots one of the large transports ran aground not far from Mackay’s Point, which delayed the moving of the expedition three or four hours and gave the enemy full opportunity to make every disposition of his available troops for defensive purposes, and also to telegraph to Charleston and Savannah for reinforcements; and, third, we encountered the enemy, as I anticipated, about 3 miles from Pocotaligo, and in two successive engagements drove him from his strong positions, and finally compelled his retreat across the Pocotaligo River, destroying the bridge behind him.

The march and fight continued from about 1 o’clock until between 5 and 6 o’clock in the afternoon. The officers and troops behaved in the most gallant manner. One bayonet charge was made over causeways with the most determined courage and with veteran firmness. The advance was made with caution, but with persistent steadiness, driving the enemy over a distance of more than 3 miles, and finally compelling him to seek safety by crossing the Pocotaligo River and the destruction of the bridge. The fight was continued on the banks of the Pocotaligo, but the coming on of night and the exhaustion of our ammunition, as well as the impossibility of crossing the river, rendered it necessary for the troops to return to their boats. This was done in perfect order and with great deliberation. It was impossible for the enemy to harass our troops, as they were on the opposite side of the river and the bridge was destroyed.

So far as I know all the dead and wounded were brought off.

Nothing whatever fell into the hands of the enemy, while they were compelled to abandon two of their caissons, with ammunition, which was returned to them (the ammunition) on the banks of the Pocotaligo from our naval howitzers.

While these events were in progress the detachment under the command of Colonel Barton, of the Forty-eighth New York Volunteers, ascended the Coosawhatchie River to within 1½ miles of the village. A landing was effected, and the troops of Colonel Barton, accompanied by a detachment of Engineers and Mechanics, marched upon the village. When within about 100 yards of the railroad a train of eight or ten cars came up at high speed, and was received by a volley from our infantry and a discharge from one of the naval howitzers. As the troops were mostly upon platform cars, and very much crowded, this fire must have been very destructive. The engineer was killed, but the train was stopped in the village, and these troops were added to those already guarding the bridge, and this force made it necessary to draw off the Engineers, who were engaged in tearing up the track, having taken with them the tools required for this purpose, and the entire detachment fell back, under the protection of the armed transport and gunboat. The enemy pursued, supposing the Planter to be an unarmed transport, but her heavy guns soon drove them back in disorder, and Colonel Barton, having determined, in his dash upon the village, the position of the village and the depot, shelled them both with his 30-pounder Parrotts for nearly two hours during the afternoon. Before dark he returned to Mackay’s Point, with no loss except the wounding of Lieutenant Blanding, of the Third Rhode Island, whose arm was shattered and his side pierced by a Minie ball.

I regret to say that the main body, under the command of Brigadier-General Brannan, suffered severely in killed and wounded in the three fights, which constituted almost one continuous battle during the afternoon.

I desire to acknowledge the deep obligations I am under to Commodore Godon, as well as to Captain Steedman and the other officers and sailors of the Navy, who accompanied the expedition, and to the officers and soldiers composing the expedition, who fought with distinguished gallantry and with signal success, and have earned the thanks of the Government and of the country.

I inclose [sic] a list of casualties, which I think is nearly complete, and from which it appears that our loss amounts to about 50 killed and 300 wounded.* The loss of the enemy it was of course impossible for us to ascertain.

A few prisoners have fallen into our hands, and we have every reason to believe that the enemy suffered severely.

The greatest activity prevailed on the railroad, and trains of cars with troops appear to have been sent from both Charleston and Savannah.

I have planned three other expeditions, but am so deficient in troops that I am compelled to recruit my forces after each expedition, and this delay is disastrous. I most earnestly beg for reinforcements, that our blows may fall with far greater rapidity, and thus secure more perfect success.

I have the honor to be, general, very respectfully, your most obedient servant,

Report of Maj. Gen. Ormsby M. Mitchel, U.S. Army, commanding Department of the South and Return of Casualties in the Union forces in the skirmish at Coosawhatchie and engagements at the Caston and Frampton Plantations, near Pocotaligo, S.C., October 22, 1862, in The War of the Rebellion: A Compilation of the Official Records of the Union and Confederate Armies. Prepared Under the Direction of the Secretary of War, By Lieut. Col. Robert N. Scott, Third U.S. Artillery, and Published Pursuant to Act of Congress Approved June 16, 1880, Series I, Vol. XIV. Washington, D.C.: Government Printing Office, 1885.