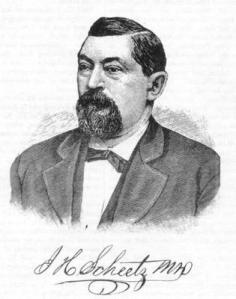 A native of Pottstown, Montgomery County, Pennsylvania, Jacob Henry Scheetz, M.D. was a game changer to whom generations of Pennsylvanians owe their lives and thanks.

Lauded upon his passing in 1891 by newspapers across the great Keystone State, he was described in the headline of his page one obituary in The Times of Philadelphia as “a Montgomery County Physician with a Fine War Record,” and in the body of that article as “one of the best known physicians and surgeons in this section of the State” and “one of the most popular physicians and surgeons in Montgomery county” socially.

The Allentown Times also reported his passing, describing him as “a surgeon of remarkable skill” whose “surgical operations [during the Civil War had been] mentioned in the Medical Reports to the War Department.”

Born in Pottstown, Pennsylvania on 15 August 1836, Jacob Scheetz was confirmed at the Lutheran Church in New Hanover, Montgomery County on 23 May 1863, and educated at the Freeland Seminary (now Ursinus College). By the age of 19, he had begun his medical studies under the guidance of Pottstown physician, Dr. William A. Van Buskirk.

In 1856, he enrolled at the Penn Medical College in Philadelphia (now the University of Pennsylvania School of Medicine), and graduated in 1858. He subsequently opened and operated a medical practice in Emmaus, Lehigh County for two years before relocating his practice to Hereford Township, Berks County.

Jacob Henry Scheetz, M.D. enrolled for Civil War military service at Camp Brightwood near Washington City on 19 July 1861. He then mustered into federal service with the U.S. Army at the age of 25, joining the ranks of the 47th Regiment, Pennsylvania Volunteer Infantry as an Assistant Surgeon on 24 September 1861. Caring for his fellow members of the 47th who had been cut down by cannon or rifle fire during the intense fighting of the Battle of Pocotaligo (1862) and Red River Campaign across Louisiana (1864), he also treated those who suffered grievously from yellow jack, typhoid and other tropical diseases contracted while serving in the Deep South.

In addition, according to his obituary, he spent 14 months as the Post Surgeon at Fort Jefferson, the federal installation in Florida’s remote Dry Tortugas where half of the 47th Pennsylvania regiment had been stationed throughout most of 1863.

His diagnostic and surgical talents were particularly tested from March to May 1864 when the 47th Pennsylvania became the only Pennsylvania regiment to fight in the Red River Campaign across Louisiana. Mounted by Major-General Nathaniel Banks, the campaign took its toll on the 47th and other Union regiments, as soldiers battled the elements as well as the Confederates they met along the way.

Diagnosing soldiers suffering from a range of injuries and illnesses, Jacob Scheetz treated men felled by disease, sunstroke, and other non-combat ailments, and also fought to stay the grim reaper’s scythe when 47th Pennsylvanians fell in small skirmishes and intense, major engagements, including the Battles of Sabine Cross Roads and Pleasant Hill (8-9 April 1864). He also tried valiantly to help those who returned less than whole from shattering POW experiences at Camp Ford, the Confederate Army’s largest prison camp west of the Mississippi River.

Many men who would have perished those terrible days went on to live long, full lives, largely thanks to his skill as a surgeon. Descendants of those soldiers also owe their lives to him because, had Scheetz not succeeded, those 47th Pennsylvanians would never have returned home to start families. 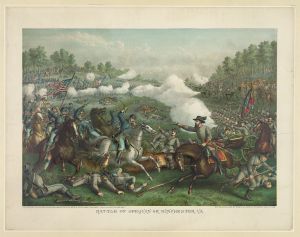 Finally, after also caring for the 47th Pennsylvania’s fallen during the opening weeks of Union Major-General Philip Sheridan’s tide-turning 1864 Shenandoah Valley Campaign, including the Battles of Berryville, Opequan and Fisher’s Hill, Dr. Jacob Scheetz mustered out upon expiration of his term of service on 23 September 1864.

Through it all, he was simply listed on federal army hospital and burial records as “J. H. Scheetz,” the final authority who confirmed the deaths of Union soldiers.

Following his honorable discharge from the 47th Pennsylvania Volunteers, Jacob H. Scheetz, M.D. returned home to Pennsylvania to resume his medical practice, which was described as an “extensive” one in his obituary. He became renowned regionally for his diagnostic expertise.

In addition, he became involved in social circles and civic affairs, serving as a Democrat on Pottstown’s city council for three years and also, from 1880-81, as chief burgess. The 16 November 1882 edition of the New York Times reported that, in 1866, “when Hiester Clymer was defeated as the Democratic candidate for Governor,” Dr. Scheetz “made a vow that he would not chew any more tobacco until the Democrats succeeded in electing their candidate.”

On 18 April 1891, after a long life filled with encounters with the best and worst of of humanity, Jacob Henry Scheetz, M.D. died in Pottstown from the kidney and liver diseases he had endured for more than four years. He was interred in the eastern section of the Pottstown Cemetery.