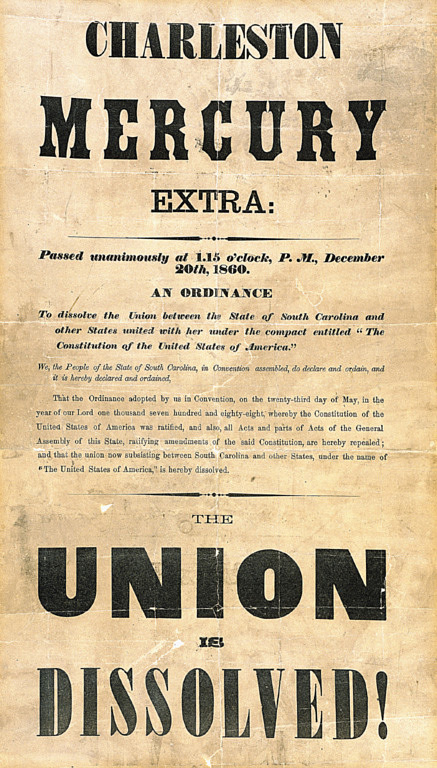 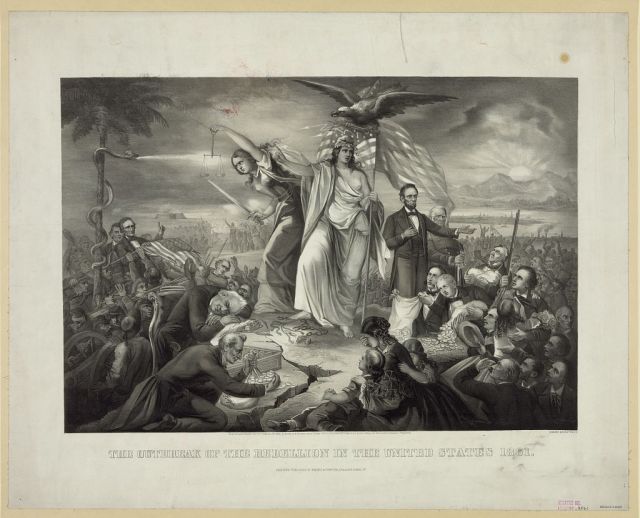 Liberty (center, crowned with laurel wreath and Phryghian cap) was guarded by President Abraham Lincoln (right) and a figure of Justice (standing clear-eyed, without blindfold at left, wielding scales and sword) while President James Buchanan slept at the feet of Justice, Buchanan’s secretary of war greedily grabbed at coins, Confederate President Jefferson Davis stood by a tree ensnared by a snake (left), and a sunrise (upper right) offers a glimmer of hope in this 1866 lithograph by Charles Kimmel. Source: U.S. Library of Congress (public domain).

Aroused and angry,
I thought to beat the alarum, and urge relentless war;
But soon my fingers fail’d me, my face droop’d, and I resign’d myself,
To sit by the wounded and soothe them, or silently watch the dead.

FIRST, O songs, for a prelude,
Lightly strike on the stretch’d tympanum, pride and joy in my city,
How she led the rest to arms—how she gave the cue,
How at once with lithe limbs, unwaiting a moment, she sprang;
(O superb! O Manhattan, my own, my peerless!
O strongest you in the hour of danger, in crisis! O truer than steel!)
How you sprang! how you threw off the costumes of peace with indifferent hand;
How your soft opera-music changed, and the drum and fife were heard in their stead;
How you led to the war, (that shall serve for our prelude, songs of soldiers,)
How Manhattan drum-taps led.

Forty years had I in my city seen soldiers parading;
Forty years as a pageant—till unawares, the Lady of this teeming and turbulent city,
Sleepless amid her ships, her houses, her incalculable wealth,
With her million children around her—suddenly,
At dead of night, at news from the south,
Incens’d, struck with clench’d hand the pavement.

From the houses then, and the workshops, and through all the doorways,
Leapt they tumultuous—and lo! Manhattan arming.

To the drum-taps prompt,
The young men falling in and arming;
The mechanics arming, (the trowel, the jack-plane, the blacksmith’s hammer, tost aside with precipitation;)
The lawyer leaving his office, and arming—the judge leaving the court;
The driver deserting his wagon in the street, jumping down, throwing the reins abruptly down on the horses’ backs;
The salesman leaving the store—the boss, book-keeper, porter, all leaving;
Squads gather everywhere by common consent, and arm;
The new recruits, even boys—the old men show them how to wear their accoutrements—they buckle the straps carefully;
Outdoors arming—indoors arming—the flash of the musket-barrels;
The white tents cluster in camps—the arm’d sentries around—the sunrise cannon, and again at sunset;
Arm’d regiments arrive every day, pass through the city, and embark from the wharves;
(How good they look, as they tramp down to the river, sweaty, with their guns on their shoulders!
How I love them! how I could hug them, with their brown faces, and their clothes and knapsacks cover’d with dust!)
The blood of the city up—arm’d! arm’d! the cry everywhere;
The flags flung out from the steeples of churches, and from all the public buildings and stores;
The tearful parting—the mother kisses her son—the son kisses his mother;
(Loth is the mother to part—yet not a word does she speak to detain him;)
The tumultuous escort—the ranks of policemen preceding, clearing the way;
The unpent enthusiasm—the wild cheers of the crowd for their favorites;
The artillery—the silent cannons, bright as gold, drawn along, rumble lightly over the stones;
(Silent cannons—soon to cease your silence!
Soon, unlimber’d, to begin the red business;)
All the mutter of preparation—all the determin’d arming;
The hospital service—the lint, bandages, and medicines;
The women volunteering for nurses—the work begun for, in earnest—no mere parade now;
War! an arm’d race is advancing!—the welcome for battle—no turning away;
War! be it weeks, months, or years—an arm’d race is advancing to welcome it.

Mannahatta a-march!—and it’s O to sing it well!
It’s O for a manly life in the camp!
And the sturdy artillery!
The guns, bright as gold—the work for giants—to serve well the guns:
Unlimber them! no more, as the past forty years, for salutes for courtesies merely;
Put in something else now besides powder and wadding.

And you, Lady of Ships! you Mannahatta!
Old matron of this proud, friendly, turbulent city!
Often in peace and wealth you were pensive, or covertly frown’d amid all your children;
But now you smile with joy, exulting old Mannahatta!