Editor’s Note: Additional letters penned by Henry D. Wharton during his time with Company C and the central command staff of the 47th Regiment of the Pennsylvania Volunteer Infantry are available, and will be added to this section as time permits. Selected letters which Henry wrote while serving with the 11th Pennsylvania Volunteers are also available on this site.

Please enjoy these samples of his letters, and check back frequently for updates.

Note: The letters shown below were written by Henry Wharton during 1862, the second year of America’s Civil War. For letters penned by Henry during prior or subsequent years, click on the year you are researching: 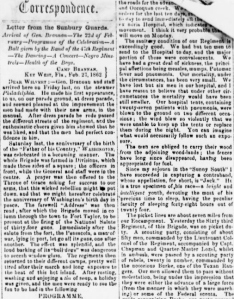 Although written by Henry D. Wharton in separate weeks, both of these letters home were published in the same edition of the Sunbury American on 15 March 1862. (Click on images for enlarged view of letter excerpts. Click HERE for full transcripts of each letter.)

Published in the Sunbury American, 3 May 1862. (Click on images for enlarged view. Click HERE  for full transcript.)

Published in the Sunbury American, 5 July 1862. (Click on image of this letter excerpt for enlarged view. Click HERE for full transcript of the entire letter.)

This letter penned by Henry D. Wharton at the close of the second year of America’s Civil War documents the departure of Brigadier-General John M. Brannan from his command role at Fort Taylor in Key West, Florida. Published in the Sunbury American, 10 January 1863. (Click on images of this letter for enlarged view. Click HERE for full transcript of the entire letter.)