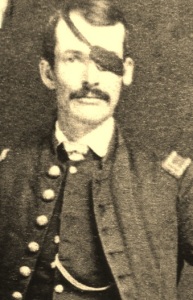 Faces of the 47th is part of a larger, ongoing initiative to document and raise public awareness about the 47th Regiment, Pennsylvania Volunteer Infantry – the only regiment from the Keystone State to fight in the Union’s 1864 Red River Campaign  across Louisiana. The video presents the photographic and illustrated images of more than two dozen men who fought with the all-volunteer unit between 1861 and 1865.

“Each one of these images holds the potential to help family history researchers feel closer to their Civil War-era ancestors while also enabling teachers, students and Civil War enthusiasts to deepen their connections to one of the most painful chapters in the American narrative,” explains Laurie Snyder, managing editor for the project. “By ‘putting faces to the names’ on military muster rolls, we’re bringing history to life while also paying tribute to those who fought to eradicate slavery and preserve our nation’s union.”

The photo digitization project received early support from Thomas MacEntee, founder of High-Definition Genealogy, via The Genealogy Fairy™ program, which enabled Snyder to locate and digitize photographs of key members of the regiment. Among the images preserved in this initial collection are the faces of a regimental chaplain, musicians, prisoners of war (POWs), military surgeons, and officers and enlisted men who were grievously wounded or killed in combat, as well as several men who became inventors, leading business executives and elected officials in and beyond Pennsylvania after the war.

“At the time I applied for the grant, there were hundreds of photographs tucked away in public libraries, historical societies, universities, and private family history collections from Maine to California and Michigan to Louisiana. Most had not yet been digitized and might have been lost for all time had Thomas MacEntee not provided the support he did when he did,” said Snyder. “More work still needs to be done, of course, because there are photos still not yet scanned, but the project took more than two dozen giant steps forward with just that one grant from Thomas. He’s a hero in my book.”

Other significant support for the project has been provided by the Burrowes and Wasserman families.

About the 47th Pennsylvania Volunteers

Recruited primarily at community gathering places in their respective home towns, the soldiers who served with the 47th Pennsylvania Volunteer Infantry were primarily men of German heritage whose families still spoke German or “Pennsylvania Dutch” more than a century after their ancestors emigrated from Germany in search of religious and political freedom. Still others were recent immigrants from Germany, Ireland and Cuba. Formerly enslaved black men who had been freed by the regiment from plantations in South Carolina and Louisiana were added to regimental rosters in 1862 and 1864.

In addition to fighting in the battles of Sabine Cross Roads/Mansfield, Pleasant Hill and Monett’s Ferry/Cane River during the Red River Campaign, the 47th Pennsylvania Volunteers also engaged in the defense of Washington, D.C. in 1861 and again in 1865, following the assassination of President Abraham Lincoln; the capture of Saint John’s Bluff, Florida and Battle of Pocotaligo, South Carolina (1862); the garrisoning of Forts Taylor and Jefferson in Key West and the Dry Tortugas, Florida (1863); Union Major-General Philip Sheridan’s tide-turning Shenandoah Valley Campaign (1864), including the battles of Berryville, Opequon, Fisher’s Hill, and Cedar Creek; and provost (military police) and Reconstruction duties in Savannah, Georgia and Charleston, South Carolina (1865). Most were finally released from duty when the regiment formally mustered out on Christmas Day in 1865.