Barely four months old when December 1861 arrived, the 47th Pennsylvania Volunteer Infantry continued its occupation of Virginia—just one of the many Union regiments attached to the Army of the Potomac charged with defending the nation’s capital from potential invasion by Confederate States Army troops during the first year of America’s Civil War. Encamped at Camp Advance near Fort Ethan Allen during late September and early October, the 47th Pennsylvania had spent a significant portion of its time reinforcing and expanding upon the basic training in Hardee’s light infantry tactics that it had received upon its muster at Camp Curtin.

On one typical day—Friday, October 4—the regiment drilled from just after reveille until roughly 7 a.m., repeated the drill between 10 and 11 a.m. and then again between 2 and 3 p.m., and then marched in a formal regimental parade from 5 to 6 p.m. Two days later, the regiment demonstrated its readiness yet again when its members were formally inspected by senior officers of its brigade. At midnight the next day—Monday, October 7—the 47th Pennsylvania Volunteer Infantry was ordered to engage the enemy.

Forming a new battle line the next morning at 8 a.m., the 47th Pennsylvania Volunteers were assigned, again, to guard both sides of their brigade. When neighboring Confederate troops failed to attack by 10 a.m., they were ordered to begin fortifying their brigade’s position, and proceeded to carve out a five-mile road and fell a substantial number of trees in order to construct earthen breastworks in front of the brigade’s artillery batteries. They were also assigned to dig holes to create rifle pits for brigade snipers—work which continued until they were relieved by a regiment from Vermont at sundown. Allowed to sleep until daylight via a procedure known as “laying on their arms,” they essentially held their rifles while napping lightly.

Ordered on toward Manassas Gap early that same week, the 47th Pennsylvania Volunteers were next stationed between Lewinsville and Falls Church as part of this mission. Moving back and forth around this area, they reached as far as the Leesburg Turnpike, which was roughly two miles from the Chain Bridge they had first crossed when entering Virginia in September. Moving out again the next day, the 47th Pennsylvania’s right wing (Companies A, C, D, F, and I) were ordered to head for a new camp site in Fairfax County, Virginia. Marching to a site two miles outside of Falls Church, they began pitching regimental tents at “Camp Big Chestnut”—so named due to the looming presence of a large chestnut tree located there. This encampment would ultimately come to be known as Camp Griffin.

Meanwhile, the men from H Company and other units of the 47th Pennsylvania’s left wing were ordered out on a new, five-mile expedition. During this time, a six-man detail from H Company, commanded by Lieutenant William W. Geety, was sent out on reconnaissance toward the Richmond Turnpike, but nearly met with disaster when Confederate cavalry approached within 300 feet of that detail’s position around midnight. Fortunately, this detachment was saved by a thick fog which descended and obscured its position from the enemy’s view.

On Thursday, October 10, Geety’s party was joined by the regiment’s third-in-command, Major William H. Gausler, who ordered Geety to perform further reconnaissance. Spotting enemy pickets a quarter mile away from the main encampment of the 47th Pennsylvania’s expedition, Geety promptly returned to Gausler to report his findings. Men from G Company were then placed on picket duty, which they performed until they were relieved at 1 a.m. the next day.

According to regimental historian, Lewis Schmidt, Colonel Tilghman H. Good, the 47th Pennsylvania’s founder and commanding officer, reported to his superiors “that the work associated with being out on advanced picket duty was very difficult, and that the enemy pickets at times were too close to his camp, which gave his troops constant unrest.” Further adding to their stress, they were forced to wait so long for their tents to be brought from their former encampment that they ended up having to pitch those tents “during constant alarms from the enemy pickets.”

They’d barely finished when the rains came. Geety later reported that they’d endured such a hard downpour that he’d “slept in a puddle all night”; those of his subordinates who weren’t sent out on picket duty again spent the next two days trying unsuccessfully to dry their clothes. 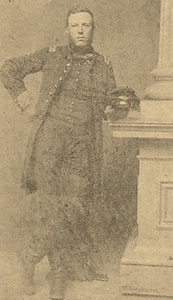 Many hours were, in fact, passed in similarly miserable conditions—so much so that camp life became a test of endurance. According to Captain John Peter Shindel Gobin, the commanding officer of the 47th Pennsylvania’s C Company, Friday, November 29 was “the most disagreeable time we have yet experienced.” Assigned to picket duty, he had been ordered to march his subordinates out and position them away from camp some distance in order to head off potential enemy attacks on the Army of the Potomac’s massive encampment by Confederate troops stationed in their vicinity.

“It rained hard all day and night, and was very cold. I had command of the first relief, which went to the special reserve at 12 midnight. By that time most of us were wet through, so I took possession of a minister’s house, near by, where I quartered my men until morning.”

Additional letters written by other 47th Pennsylvanians around this same time evoke similar shivers of empathy, transporting present day readers back in time and into the muddy shoes and heavy, sodden uniforms of the cold, sniffling soldiers who wearily set pen to paper once they were finally permitted to crawl back into their dry tents at camp.

Consequently, disease became an even more formidable foe than the Confederate States Army—and a fearsome one at that, scything multiple members of the regiment from its ranks, including two drummer boys, aged thirteen and fifteen, and a seasoned sergeant within days of each of their respective hospitalizations, followed by Daniel Foose, a 19-year-old private from Perry County’s H Company who was felled by typhoid or bilious fever; David Losch, a 22-year-old Allentown native and private from I Company; Daniel Biceline, a 23-year-old H Company private also felled by typhoid; and Private William Young of G Company.

Easing their distress somewhat was the long overdue news that members of the 47th Pennsylvania Volunteer Infantry would finally be paid for the first time since enrolling for service. When the money arrived, many members of the regiment began transferring what they could home to parents and wives. C Company men sent $900 to their loved ones in Sunbury while those from Company A and Company D sent a whopping $2,500 and $2,000, respectively, to Northampton and Perry counties.

Additionally, the regiment was still stationed close enough to Pennsylvania that a significant number of 47th Pennsylvanians were able to personally return to their hometowns on brief furloughs while others were buoyed by family members who had the means to travel to their Virginia encampment for short visits.

As a result, it was with a mixture of heavy hearts and hope that members of the 47th Pennsylvania Volunteer Infantry welcomed the dawn of Christmas Day in 1861.

Among those making the time more bearable for his fellow 47th Pennsylvanians was Regimental Quartermaster and former Northumberland County sheriff James Van Dyke who, according to the December 21 edition of the Sunbury American, “came home on a short visit and returned to Camp Griffin 47th Regiment … taking with him three or four large boxes filled with various articles of comfort, for the inner as well as the outer man….”

“Among the edibles, was a barrel of ‘sour krout,’ presented by William I. Greenough, Esq.”

In addition to being a beloved taste of home for the often hungry members of the regiment, the sauerkraut likely also served an important cultural function for the numerous German-Americans and German immigrants who had enrolled with the 47th. When paired with pork and eaten on New Year’s Day as part of an annual tradition, sauerkraut has been said to attract prosperity for the remainder of the year because it is made from green cabbage (green being the color of money) while eating pork ensures progress and good luck because pigs “root forward” with their snouts rather than backward with their feet as chickens do, according to a 2015 article by Billy Penn News. 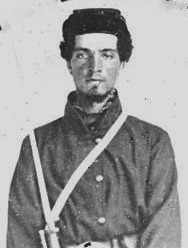 Food and other “articles of comfort” were, in fact, on the minds of pretty much all members of the regiment as they were about to spend their first Christmas and New Year’s holidays away from loved ones. While penning a letter to his family during regimental church services on Sunday, December 29, Private Abraham N. Wolf told his wife, Sarah, that the Regimental Band was playing a hymn as he wrote to her.

Noting that he’d received the gift box she’d sent him, Wolf’s joy was child-like when he added that “everything was in it yet what you said was in it and it came on the second day of Christmas.” Just that morning, he’d fried “fried some of the sausages” that she’d sent him “and took some sausages along for dinner” later because he’d been scheduled for duty—chopping wood for the regiment—“and they tasted pretty good to me for it was something new to me for it was from home.” And then he added that the day before:

“… the chicken cooked for dinner and so we had a good dinner for it was the best dinner that I had since I left home. And this morning I ate the last part of the chickens but I have some of your molasses candy yet which you sent to me. And I have the big cake yet. And that pocket handkerchief which your mother sent to me I got too.”

Their joy and respite were brief, however; by mid-January 1862, the 47th Pennsylvania Volunteers were on the move again. When they finally stopped and were able to take in their new surroundings, they would suddenly gain an entirely different perspective on the meaning of “far from the comforts of home.”

For more Christmas and New Year’s-related content, please check out this sampling of our prior posts on 47th Pennsylvania Volunteers: One Civil War Regiment’s Story:

To see an image and read more of Abraham Wolf’s letter, read the article, “1861: Abraham Nicholas Wolf Jr. to Sarah (Trexler) Wolf,” by Spared and Shared.