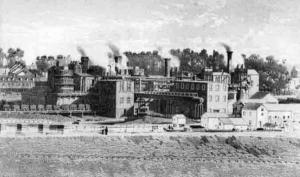 Established in 1856, the Jordan Artillerists (also known as the “Jordan Artillery”), was one of three militia units formed in Allentown, Lehigh County, Pennsylvania during the early to mid-1800s. The others were the Allen Infantry, commanded by Captain Thomas Yeager and also known as the “Allen Guards,” and the Allen Rifles, commanded by Tilghman H. Good, the man who would later become the mayor of Allentown, Pennsylvania after founding and commanding the 47th Regiment of the Pennsylvania Volunteers during the Civil War.

Commanded by Captain William H. Gausler, later a major with the 47th Pennsylvania Volunteers, the Jordan Artillerists were men who lived in what is now Allentown’s 1st Ward, and were described by historian James L. Schaadt as members of “the down-town company” (versus the “up-town” Allen Rifles) — so labeled by Schaadt because of the downtown and uptown locations of their respective armories. The Jordan Artillerists, in fact, had turned a ballroom at the Rex Hotel into their armory.

According to Schaadt, “Captain Gausler gave faithful attention to the company, which was clothed in the regulation U.S. Army uniform and fully equipped with Spingfield rifles, belts, canteens, etc. The Hardee tactics were followed, and under his instruction the company became noted for its double-quick maneuvering and its drill in the manual of arms at the tap of the drum.”

Schaadt also noted that, while Gausler and his men were more than willing to engage in the regional militia competitions of their era, that most of the other area militia opted not to compete with the Jordan Artillerists because they knew they would be soundly beaten by Gausler’s better trained unit. However, this was not true of the relationship between the men of the Jordan Artillerists and the Allen Rifles, who maintained “a warm rivalry” with both units “striving to excel the other in appearance, uniform, equipment and efficiency, with the result that each became a crack company.”

By the fall of 1860, Gausler had procured for his Jordan Artillerists “new regulation United States Army uniforms with dress coats and overcoats,” according to Schaadt. “The company paraded in the new uniform for the first time on Jackson Day, Feb. 8, 1861, when it entertained the Norristown Rifles commanded by John F. Hartranft.” Hartranft went on to command both the 4th and 51st Regiments, Pennsylvania Volunteer Infantry, and serve as the special Provost Marshal for the trial of the Lincoln assassination conspirators before being elected Governor of the Commonwealth of Pennsylvania.

On 21 February 1861, the men of the Jordan Artillerists and the Allen Rifles joined with those from the Menninger Band (later the Allentown Band) to march in the military parade associated with the national flag raising ceremony led by President Abraham Lincoln at Independence Hall in Philadelphia. The following day, the two militia units were assigned to guard Jones House in Harrisburg during Lincoln’s speech there to 5,000 soldiers.

On the day Fort Sumter fell to Confederate forces (13 April 1861), residents of Lehigh and Northampton counties “called a public meeting at Easton ‘to consider the posture of affairs and to take measures for the support of the National Government,’” according to Alfred Mathews and Austin N. Hungerford, authors of History of the Counties of Lehigh and Carbon, in the Commonwealth of Pennsylvania. At that time, the citizenry voted to form and equip an entirely new military unit — the 1st Regiment, Pennsylvania Volunteer Infantry.

Opting to place former Allen Rifles commander Tilghman H. Good in charge, they assigned him the rank of Lieutenant-Colonel. According to Lewis Schmidt in his A Civil War History of the 47th Regiment of Pennsylvania Veteran Volunteers, the Allen Rifles and the Jordan Artillerists then “combined their forces as the Union Rifles to meet the request of the state that units arriving should have at least 100 men on their muster,” and mustered in at Camp Curtin in Harrisburg on 20 April 1861 as Company I of the newly formed 1st Pennsylvania Volunteers.

Upon fulfillment of their Three Months’ Service, the Jordan Artillerists and other soldiers from Company I were honorably discharged, mustering out at Harrisburg on 23 July 1861. Many still loyal to their former captain, William H. Gausler, signed up again just weeks later as he and Good began recruiting for his 47th Regiment, Pennsylvania Volunteer Infantry.

1. Mathews, Alfred and Austin Hungerford. History of the Counties of Lehigh and Carbon, in the Commonwealth of Pennsylvania. Philadelphia, Pennsylvania: Everts & Richards, 1884.

2. Schaadt, James L. Company I, First Regiment Pennsylvania Volunteers: A Memoir of Its Service for the Union in 1861, in The Penn Germania: A Popular Journal of German History and Ideals in the United States, vol. 1, no. 1, H.W. Kriebel, editor. Lititz and Cleona, Pennsylvania: Holzapfel Publishing Co, 1912.